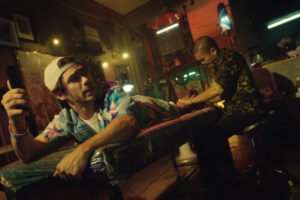 Every year, thousands of people get tattoos in languages they don’t know, only later to discover (if they’re lucky) the tattoos didn’t say what they thought they did.

For world tattoo day Duolingo launched a service on social media called the tattoo duo over. We invited people to get their foreign language tattoos checked and corrected. All you had to do was tag a picture of your foreign language tattoo with the designated hashtag and one of Duolingo’s language specialists would check to make sure it was correct. Not only did we check thousands of tattoos, we even invited several unlucky ‘winners’ to get their tattoos corrected with the phrase they really wanted at a renown tattoo parlor in Paris.